If you build this server and neither update nor check up on it, I can practically guarantee it will become part of a botnet. Depending on your host and jurisdictions, you may also be liable for any damage (both tangible and intangible) that this server causes. This liability is why I provide Web Administration services, but I digress.

I warned you, and I’ll sleep soundly arming you with the following knowledge.

I recently ran into a situation where I needed to run a test with a Québec City IP address.

I checked every well-known Virtual Private Network (VPN) provider for their server lists, but none had servers specifically in Québec City. Regardless, I tested with a VPN in Montreal, which is in the Canadian province of Quebec and about 3 hours away (163 mi/263 km) from Québec City, but I couldn’t reproduce the issue.

It turns out that Microsoft Azure has had cloud infrastructure service in Québec City since May 2016, so it was vexing that there wasn’t a VPN with the same service.

Possibly because of the 12-month free trial that new accounts automatically receive, I couldn’t create a VM in the Canada East region. So, this project will fill that gap.

After additional research, I found it’s possible to create a VPN Gateway in Canada East and have the VM use the linked Virtual Network (VNet) as a Network Interface Controller (NIC). We need the VPN Gateway to connect to the VNet securely, but the VM will also use it to connect to the Internet.

It’s easier to test with a full web browser, so we’ll also need a Desktop Environment (DE), a way to connect to the VM with a Graphical User Interface (GUI), and a web browser with a GUI.

To achieve this, we’ll cover these steps in this guide:

The best thing about software is that it doesn’t require much: a Microsoft Azure VM running Ubuntu 20.04 LTS.

Setting up this system is involved considering the extra steps for making the VM private. First, get started with a Microsoft Azure free account. Now, the fun begins.

Since we can’t make a VM in the Canada East region, we’ll first have to make a VNet there instead. The VNet will also need a way to connect to the Internet, so we’ll also make a VPN Gateway in the same region.

The official documentation covers the steps for making the VNet and will be the most up-to-date, but we’ll summarize them in this guide.

To prevent conflicts with either convention, we can use the 172.16.0.0/12 address range, as the documentation does.

Follow the documentation for creating a VNet with these changes:

Finally, we’ll need a VPN Gateway (also known as Virtual Network Gateway) to connect into and out of the VNet we created.

Follow the documentation for creating a VPN Gateway with these changes:

First, we’ll use PowerShell to make the root certificate and save it in the $cert variable by running this:

In the same PowerShell console, we’ll create the client certificate using the root certificate in the $cert variable by running this:

If the PowerShell console is closed for any reason, there are instructions for how to find the root certificate and create the $cert variable for it.

Next, we must export the root certificate as a .cer file so we can use it to configure the VPN Gateway as a point-to-site VPN.

The fastest way to open the Certificate Manager is by pressing Windows Key + R, entering certmgr.msc, then pressing Enter.

Look for the root certificate under Personal then Certificates in the left pane:

To export it, click the Action option in the menu, then go to All Tasks and select Export…:

Follow the default options in the Certificate Export Wizard except under Export File Format, select Base-64 encoded X.509 (.CER): 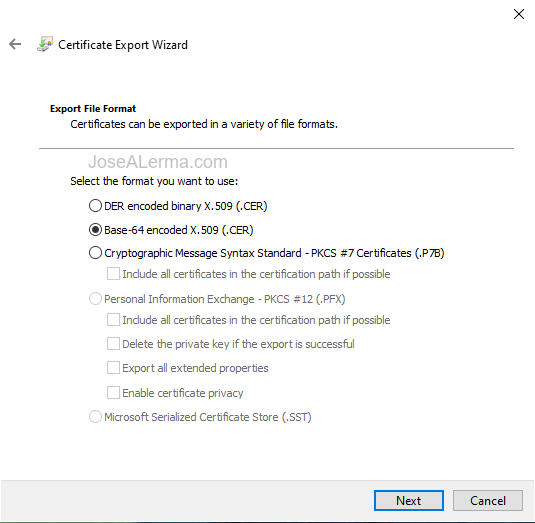 Under File to Export, enter an easy-to-remember location, like:

The above path creates a root.cer file in the Documents folder so we can open it in Notepad and copy the contents. Now that we have a physical copy of the root certificate, we can go back to the VNet Gateway to upload it as part of the point-to-site configuration.

Follow the documentation for configuring point-to-site with the following changes:

After the point-to-site settings save, the Download VPN Client option should be available. Select it to download a .zip file with the same name as the now VPN Gateway. In this instance, it’s a file called VNet1GW.zip.

The official documentation for configuring the Azure VPN Client includes links to download it, including the Microsoft Store.

Now, the Azure VPN Client can connect to our VNet. In this example, it’s VNet1: 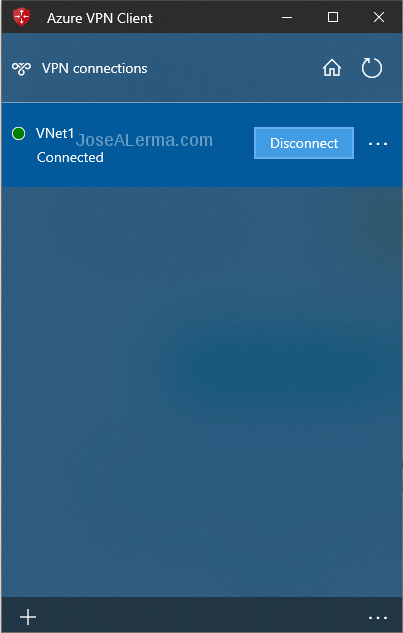 We connected our computer to the VNet in Canada East, but there aren’t any resources in our VNet.

Now that we finished the networking, we can create the VM in Canada East and connect to it. We’ll make it private by allowing no incoming connections and not provisioning a public IP address.

Follow the official documentation for creating a VM with the following changes:

Although B1s is eligible for free services, it only has one vCPU, which doesn’t work well with Google Chrome. Even with a lightweight DE like xfce4.

Under Auto-shutdown, select Enable auto-shutdown and deselect Notification before shutdown. Auto-shutdown is a great way to save costs on a VM only used for testing. Don’t forget to set it to a time you won’t be working.

Next, connect to the VM with SSH using the IP address under Private IP address to start installing software: 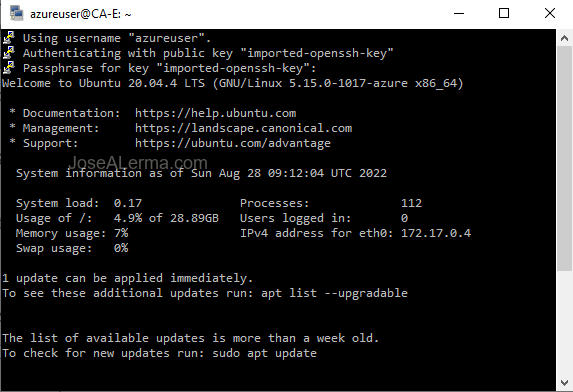 Since the Azure VPN Client connects us to the VNet, we can access the VM “locally.”

As I mentioned in my CentOS AMI Web and Mail Server with DDNS guide, I prefer PuTTY/KiTTY when connecting from Windows operating systems. However, the documentation includes instructions for PowerShell.

After connecting with SSH, we need a more standard web browsing experience. So follow the official documentation for installing a DE and an RDP server. To summarize the documentation, run the following commands:

A wall of bash commands is tough to process, but this is what we’re doing:

Next, go to VM in the Azure Portal, and under Settings, select Connect, RDP, then click Download RDP File.

As it says, it downloads an .rdp file with the name of the VM. In this case, it’s called CA-E.rdp.

When we open the file, it opens the Remote Desktop Connection software. After clicking Connect and entering the username and password we previously created, we’ve logged into our Microsoft Azure VM with a DE: Finally, download and install Google Chrome by entering the following:

With Google Chrome installed, we can check our IP address and confirm we’re in the VNet’s region: 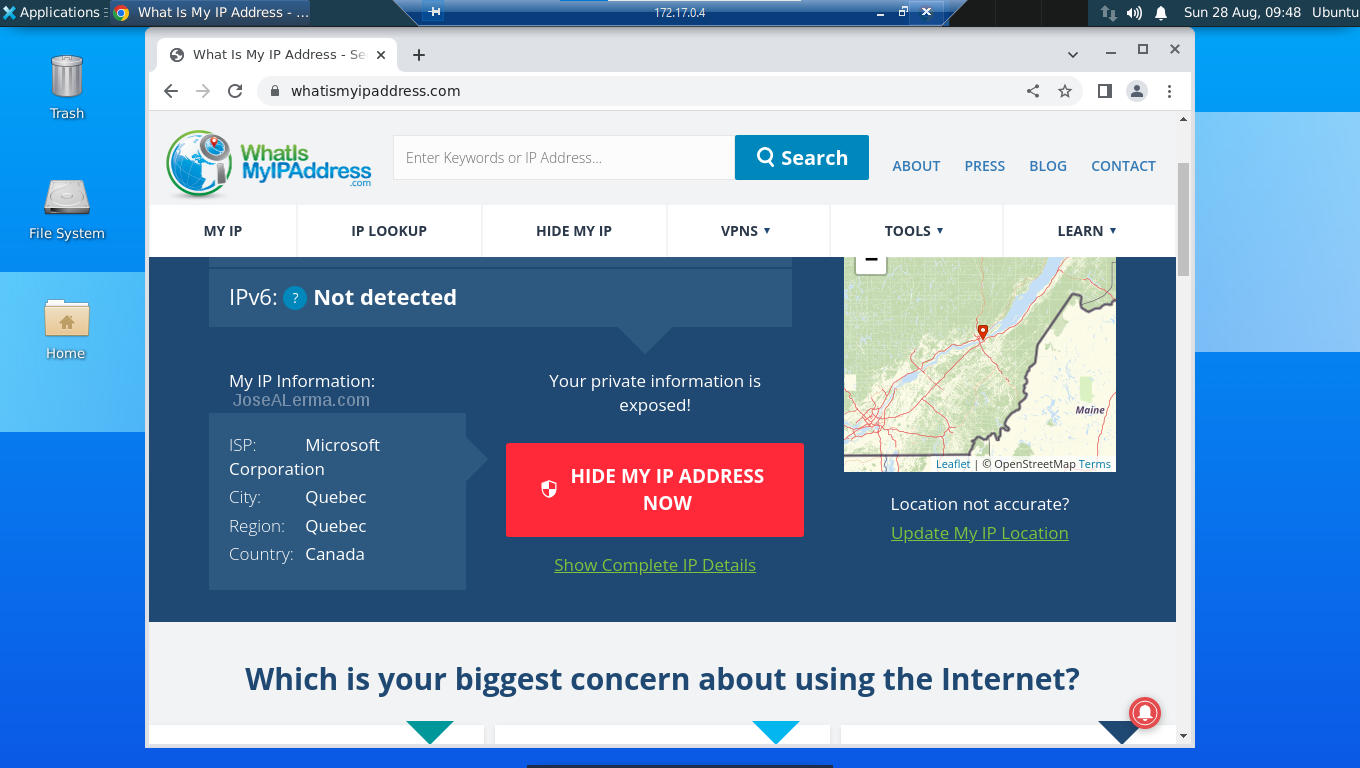 Okay, we can access websites in a browser that supports JavaScript with an IP address in a different country, but how do we get files from the VM to our computer? Well, it turns out there’s an old protocol that lets us do just that.

The SSH File Transfer Protocol (SFTP) has been around since way back in 1997 and distinguishes itself by providing some file manager features. I defer to Wikipedia for the details, but SFTP lets us connect to the VM using SSH with a protocol designed for secure file transfer.

There are many SFTP Clients out there, but I prefer FileZilla because it’s as stable as an igneous rock and has a portable version.

First, open the Site Manager and fill out the following: 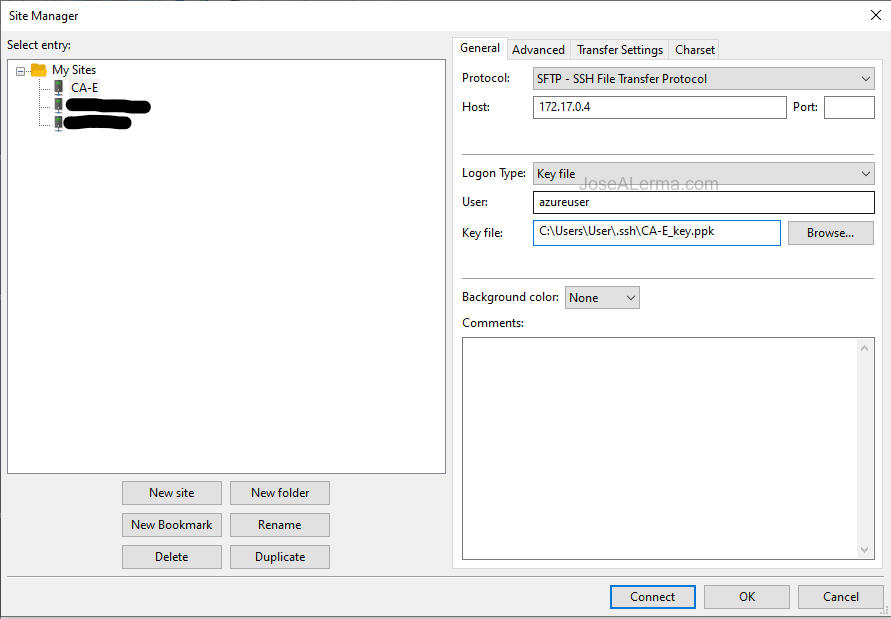 Finally, click Connect and use the SFTP Client to navigate to the desired folders, then right-click the file to select the Download option in the menu to copy over files: With that, we have a computer (well, it’s technically a VM) in a different country that we can use to access websites and transfer files.

The Microsoft Azure B2s instance runs Ubuntu 20.04 LTS with RDP and SFTP access on a VPN located in Québec City.

In this project, I learned the ultimate form of spoofing an IP address by effectively making a VPN with extra steps and features.

I can’t say I recommend creating a VPN with a GUI, but it’s helpful in edge cases where one needs an IP address in a specific region with a JavaScript-enabled browser.

Nevertheless, this project was highly educational. The secure way of accessing a private VM in this project has given me an idea for another project I’ve been researching.

Truthfully, the cloud has limitless possibilities, so stay tuned to explore them all!

About Jose A Lerma
I like learning things: in my spare time, I maintain novelty sites, study programming languages, and develop various projects.
BioRésumé